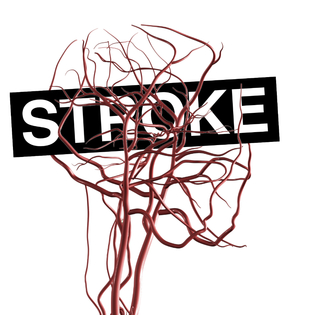 Atrial fibrillation is the most important single cause of “ischemic stroke” 缺血性中風 to people >90 years of age.

Warfarin sodium treatment has been considered capable reducing the stroke risk in people with AF compared with placebo 安慰劑.  It should be applied independent of age, particularly in the elderly with other risk factors associated.

Causes
When the blood supply to brain is interrupted or reduced, a stroke occurs.  This phenomenon deprives the brain of oxygen and nutrients, causing its cells to die.

A blocked artery may cause a stroke (ischemic stroke) or the bursting or leaking of a blood vessel (hemorrhagic stroke 出血性中風).  Some people may experience only a temporary disruption of blood flow to their brain (transient ischemic attack 短暫性腦缺血發作, or TIA).

When a blood vessel in brain bursts or leaks, hemorrhagic stroke occurs.  Brain hemorrhages can end up from many conditions which affect blood vessels, including uncontrolled high blood pressure (hypertension), overtreatment with anticoagulants and weak spots in the wall of blood vessel (aneurysms 動脈瘤).

A less common cause of hemorrhage is the burst of an abnormal tangle of thin-walled blood vessels (arteriovenous malformation 動靜脈血管畸形) existing at birth.

1. Intracerebral hemorrhage 腦出血 – a blood vessel in the brain bursts and spills into the surrounding brain tissue, damaging brain cells. Brain cells beyond the leak are lack of blood and also damaged as well.

High blood pressure, trauma 創傷, use of blood-thinning medications 血液稀釋藥物, vascular malformations 腦血管畸形 and other conditions may cause an intracerebral hemorrhage.

2. Subarachnoid hemorrhage 蛛網膜下腔出血 – An artery on or near the surface of the brain ruptures and spills into the space between the surface of brain and skull.  This bleeding is often signaled by a sudden or severe headache.

A subarachnoid hemorrhage is commonly caused by the rupture of a small sack-shaped or berry-shaped outpouching on an artery namely as aneurysm 動脈瘤.  After the hemorrhage, the blood vessels in the brain may widen and narrow erratically (vasospasm 血管痙攣), causing brain cell damage and resulting in further limiting the blood flow.

It is also known as a ministroke 小中風 — a brief period of symptoms similar to those in a stroke.  It is caused by temporary decrease in blood supply to part of the brain, often last less than five minutes.

Similar to ischemic stroke, when a clot or debris blocks blood flow to part of the brain, a TIA occurs.  Because the blockage is temporary, TIA doesn’t leave lasting symptoms.